You Shall Not Intermarry

You Shall Not Intermarry

Last year a movie was released called Loving that told the true story of Richard and Mildred Loving who got married, were arrested, and then forced to leave the state to avoid prison sentences. Their crime? He was white and she was black, and they were forbidden by law to be married in Virginia in the 1950s. Eventually their case went before the Supreme Court, the 1967 Loving vs. Virginia, which was decided in their favor and ended all race-based legal restrictions on marriage in the US. Why am I telling this story? Just because I love movies? No, it’s actually a good tie-in to our series on Misused and Misunderstood Verses in the Bible. Many segregationists and those who opposed interracial dating/marriage (including some of the men who founded the PCA) used Scripture verses to make their arguments. Does the account of the Tower of Babel and the restrictions against the Israelites marrying foreigners show us that God has separated the races and that it is His will to keep them separate? Let’s consider the whole counsel of Scripture together this Sunday.

I have to go out and play in the snow with the kids, hope you’re doing the same today. Please pray for the Silvernails as they travel this weekend to Florida for Dave’s dad’s funeral. 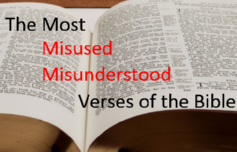 More in The Most Misused & Misunderstood Verses of the Bible