This week we’ll be looking at Ruth, chapter three in our Advent series on “Christmas in Ruth.” In many ways, Ruth 3 is the climax of the story! Boaz agrees to serve as Ruth and Naomi’s redeemer and to rescue them. But it’s striking that this occurs at midnight — how many times in God’s Word does He come to bring salvation and judgment in the middle of the night! Most obviously God’s redemption of Israel in Exodus occurred at midnight (as we’ll see in Exodus 12 later in January); that was when the firstborn of Egypt die as the means by which God’s firstborn, Israel, might live.

Of course, one day there would be another midnight hour when angels will sing about the redemption of the world: as the shepherds kept watch over their flocks by night, they heard, Luke 2:11-14, "For unto you is born this day in the city of David a Savior, who is Christ the Lord. And this will be a sign for you: you will find a baby wrapped in swaddling cloths and lying in a manger.” And suddenly there was with the angel a multitude of the heavenly host praising God and saying, “Glory to God in the highest, and on earth peace among those with whom he is pleased!”

That midnight song is memorialized for us in the Christmas hymn, “It came upon the midnight clear, that glorious song of old, from angels bending near the earth to touch their harps of gold: ‘Peace on the earth, good will to men, from heav’n’s all-gracious King’; the world in solemn stillness lay to hear the angels sing.” And so, it’s fitting that we sing that song as well as remember that “good Christian men rejoice” because “Jesus Christ was born to save!”

It’s a reminder that God continues to show His steadfast love and everlasting kindness to those who love this Christmas story — the story of Jesus, the Son of God and Savior of Sinners, who came at the fullness of time, in order to redeem those of us who were born under the condemnation of the Law. He takes those of us who were empty and fills us with good things for His glory! Wait, doesn’t that sound like the Gospel? Why yes, yes it does. In fact, all of Ruth sounds like the Gospel. So come this Sunday and hear more of this Good News for yourself. See you then! Dr. Dave 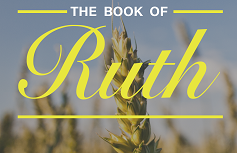