Our COVID-19 precautions can be found at: https://www.potomachills.org/covid-19-safety

I’d be dating myself if I told you that I was 16 when the Beatles album Sgt. Pepper’s Lonely Hearts Club Band came out in 1967. For that album Paul McCartney had written the song called “When I’m Sixty-Four.” The song is sung by a young man to his girlfriend, and is about his plans of growing old together with her:

When I get older losing my hair
Many years from now
Will you still be sending me a valentine
Birthday greetings, bottle of wine?
If I’d been out till quarter to three
Would you lock the door?
Will you still need me, will you still feed me
When I’m sixty-four?

At 16 I thought that day would never happen to me. Well, the funny thing is that, in December, I turned sixty-four! Ooof!! Fortunately Deb still needs me and still feeds me and, when I look back on the last forty-eight years, I can see God’s hand and his gracious blessings in our lives. But through the years I’ve also been beset with problems, questions, gray areas, and life decisions fraught with difficult choices. In many of them I could have made wiser choices. What does the Bible say about wisdom anyway? Could you afford to be wiser?

Sunday we begin a sermon series on the Bible’s most notable wisdom book – Proverbs. Over this summer we’ll look at Biblical wisdom on subjects such as goodness & kindness, discipline, truth, friends, marriage, families, anger, and trust in God as portrayed in Proverbs. This Sunday is the kickoff as we look at parts of the first four chapters of Proverbs to see what they teach about the nature and pursuit of wisdom. We’ll learn about danger at sea, the fear of the Lord (Whaaaaat!), and sweet dreams. The good news is that I just went through my sermon and cut out all the boring parts! See you Sunday, – Elder Jed Faroe (64) 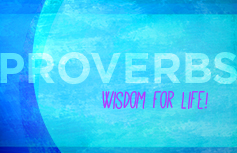